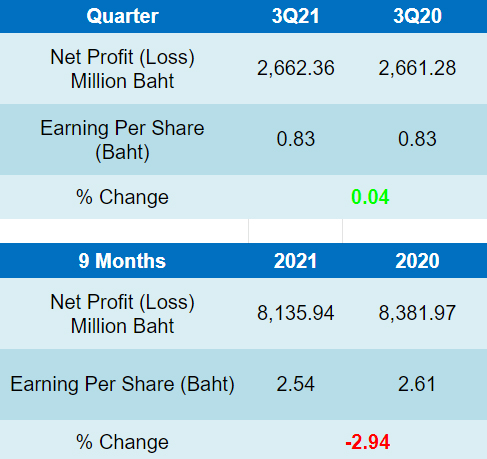 The consolidated financial statements for 3Q21 showed a net profit of 2,662 million baht, a slight rise YoY but a drop of 5% QoQ, mainly due to a lower contribution from the local wireless telecommunication business, which recorded a net foreign exchange loss and an increase in depreciation & amortization after the acquisition of new frequency spectrums.

Net profit at 9M21 was 8,136 million baht, a drop of 3% from 9M20, mainly due to a lower contribution from the satellite & international businesses which had recorded a share of compensation (after a prepaid expense was written off) as other income in 2Q20. Even if this compensation is excluded, the contribution from THAICOM would have dropped, due to lower revenue and higher SG&A from legal consultation fees.

Sales and service revenue decreased slightly QoQ, but increased YoY and from 9M20 due to higher fixed-broadband revenue as the subscriber base expanded, following the work- and study-from-home requirement, partially offset by lower ARPU as market prices remained low to address weak consumption. Revenue from the non-mobile enterprise business rose due to the growing demand for cloud-based, data center and enterprise solutions, along with the introduction of new services (such as eFBB)  to expand into new markets.However, mobile revenue in 3Q21 was flat QoQ and YoY, while 9M21 was lower than 9M20, reflecting the prolonged economic impact from weak consumer spending.