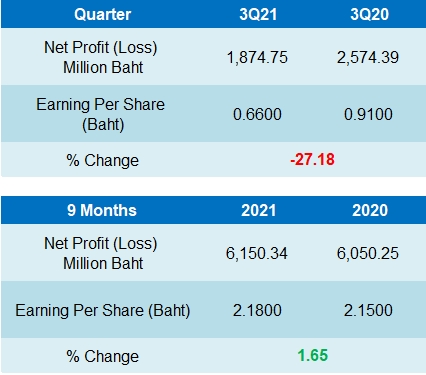 In addition, IPP’s gross profit decreased as a result of GHECO-One’s unplanned outage for 28 days. However, there was an increase in shares of profit from Xayaburi hydro power plant according to higher water level than the same period of last year.

The company recognized synergy value from the acquisition of GLOW amounting 432 million baht (after tax) in 3Q21, mainly from operation and maintenance – power and steam network integration, commercial activities especially cost optimization, production and expanding customers base as well as procurement and maintenance management.

GPSC stated that the Energy Regulatory Commission (ERC) announced to maintain the fuel adjustment charge (Ft) for the invoice during September – December 2021 which resulting in the Ft of -15.32 Satang/unit for the next four months. The main reason is to reflect the depreciation of Thai Baht and the rising trend of global crude oil price, while also support users during the period of uncertainty from the COVID-19 pandemic.