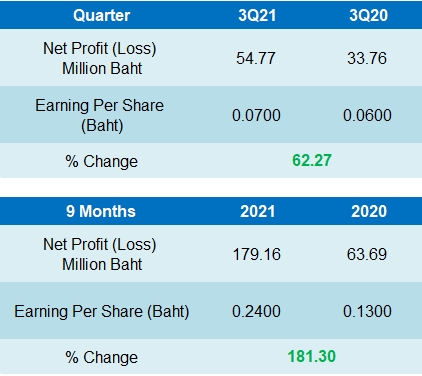 For the three-month period ended 30 September 2021, The company had revenue from sales decreased from the same period of the previous year amounted to 143.36 million baht. Accordingly, sales revenue depends on customers’ budgets and demand at a particular time.

The company generated revenue from service business 491.61 million baht, representing 100 percent of sales and service revenue. Revenue from turnkey system installation service has increased compared to the same period of the previous year at 170.48 million baht or 53.09% growth contributed by revenue recognition from the transformation of overhead line to underground line along the Pink and Yellow Line- the mega project with high value.