U City Public Company Limited (U) announced its 3Q21 consolidated financial statement through the Stock Exchange of Thailand as follows; 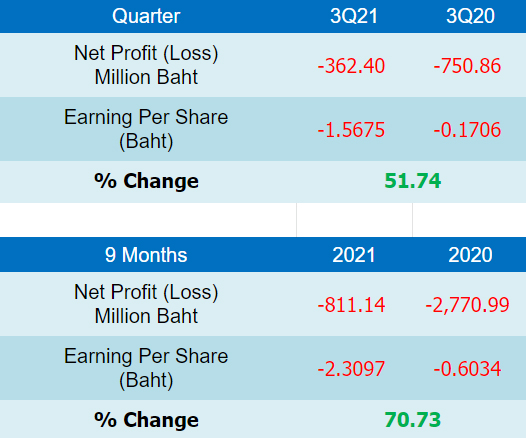 In 3Q21, U reported a net loss of THB 362.40 million, improving from a net loss of THB 750 million in 3Q 2020. The reduced loss was driven mainly by the increase in revenue, reduction in expenses, depreciation, and financial costs resulting from the investment restructuring by the partial disposal of the European asset portfolio, capital increase, partial loan repayment, and a lower share of loss from joint ventures.

Total revenue recorded was THB 1,194 million, increasing  by 3.6% YoY. The increase in total revenue was chiefly attributed to (i) a gain on disposal of investments in subsidiaries from the partial disposal of the European hotel portfolio amounted to THB 232 million, (ii) a   gain from the exchange rate of THB 42 million  (up THB 110 million YoY). The increase was partially offset by (iii) the reduction of hotel revenue (from the aforementioned partial disposal) by THB 234 million (or 25.5%) to THB 681 million, and (iv) a decrease of THB 23 million (or 35.7%) YoY in other revenues to 42 million.

In 3Q21, the hospitality segment contributed 57.1% of revenue, the office segment 8.6%, management income at 3.5%, and other revenues at 30.8% of the total revenue. Within the hospitality segment, revenue decreased by THB 234 million or 25.5% YoY to THB 681 million. The decrease was predominantly from (i) the absence of revenue of the European hotels disposed during the 1st half of 2021. Within the office and commercial unit buildings segment, revenue slightly increased by THB 1 million or 0.7% YoY to THB 101 million. Management income slightly decreased to THB 42 million or 27.4% YoY .Other income increased by 368.4% YoY or THB 290 million to THB 368.7 million. The increase was chiefly attributed to (i) gain on sales in a subsidiary company of THB 232 million, (ii) gain from the exchange rate of THB 42 million, and (iii) the increase in interest income of THB 2 million to THB 35 million.