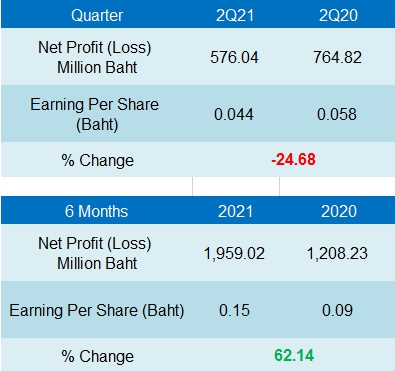 The Group posted total reported (consolidated) revenues of 6,863 million baht in 2Q 2021/22. This represented a decrease of 31.3% or 3,133 million baht YoY from 9,996 million baht in 2Q 2020/21. The reduction in total reported revenue was chiefly attributed to lower revenues from contracting works of 3,825 million baht, owing to a reduction in (1) construction revenue for the Pink and Yellow Lines, resulting from the temporary closure of the construction worker camps in July 2021 and (2) services income for the provision of E&M works and the train procurement service for the Green Line extensions as we entered tail-end of development. Nonetheless, the decrease in the reported revenue was partly offset by (3) increased service and sales income of 514 million baht and (4) higher interest income of 126 million baht.

Total consolidated expenses amounted to 4,854 million baht in 2Q 2021/22, a decrease of 3,077 million baht or 38.8% YoY largely from lower recognition of costs related to the construction of the Pink and Yellow Lines and the provision of E&M works and the train procurement service for the Green Line extensions.

Finance costs rose by 37.7% or 229 million baht YoY to 838 million baht, primarily from interest expense of 13 billion baht of BTSG debentures issued on 6 July 2021 and the drawdown of loans related to the development of the Pink and Yellow Lines.

The net profit margin attributable to the equity holders of the company in 2Q 2021/22 was 8.4% (versus 7.7% in 2Q 2020/21). The increase in net profit margin was predominantly from the reduced recognition of the construction revenue for the Pink and Yellow Lines and services income for the provision of E&M works and the train procurement for the Green Line extensions which have lower margins.