Turkey surprised the market with an interest rate cut by a full percentage point on Thursday despite consumer prices in the country sitting near 80%. The key policy rate stayed at 14% for the last seven months.

The move by the Turkish government shocked the market as central banks around the world are ready to jump on a rate hike to ease the rising inflation rate in their countries.

According to the statement by the Turkish central bank on Thursday, the rate cut  was due to expectations for the “disinflation process to start” while there are signals of a “loss of momentum in economic activity.”

Timothy Ash, a senior emerging markets strategist at BlueBay Asset Management, branded the move by the Turkish government as insane. 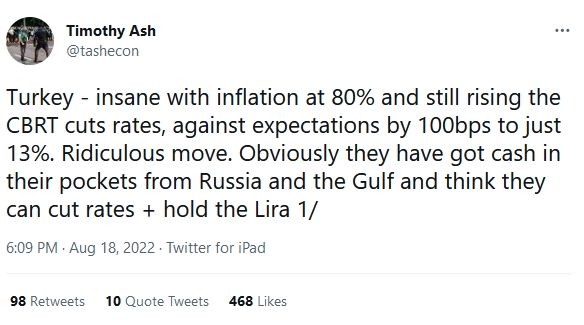