IRPC Public Company Limited (IRPC) has announced its 3Q21 consolidated financial statement through the Stock Exchange of Thailand as follows; 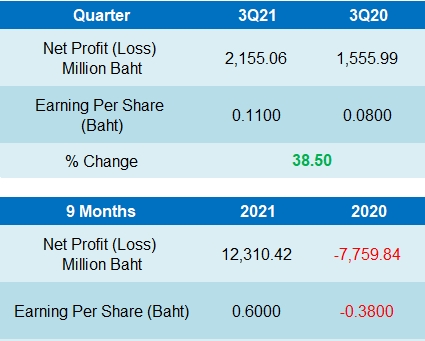 The company’s net sales was up by 24,417 million baht or 65%, attributed to a 66% increase in average selling prices following higher crude oil price versus a 1% decrease in sales volume. The average crude intake was 191,000 barrels per day decreasing by 2%. The Market GIM improved by 2,279 million baht or 46% in accordance with an increase in almost all products spread when compared with the same period last year.

Moreover, there was an unrealized loss on oil hedging dropped by 449 million baht. Still, there was an increase in gain on investment by 66 million baht. In addition, the company recorded corporate income tax amounting to 460 million baht in 3Q21 rising by 26% as the performance was improved.

In 4Q21, IRPC expected that crude oil price is likely to increase from that in 3Q21 mainly relating to incredible increases of LNG, LPG and coal prices, hence there is a forecast that crude oil demand will rise owing to gas-to-oil switching in the upcoming winter. Besides, OPEC and allies tend to keep their crude oil production plan at 0.4 million barrels per day although many countries supplicate for more crude oil supply to control the crude oil price.

Furthermore, the U.S.’ consideration to lift sanctions on Iran may be postponed from 4Q21 to 1Q22 making Iran’s crude oil export remain halted through 2021. Meanwhile, oil consumption is expected to develop on the back of improved overall COVID-19 situations, which tends to be one of the factors supporting the crude oil price.