PTT Public Company Limited (PTT) has announced its 3Q21 consolidated financial statement through the Stock Exchange of Thailand as follows; 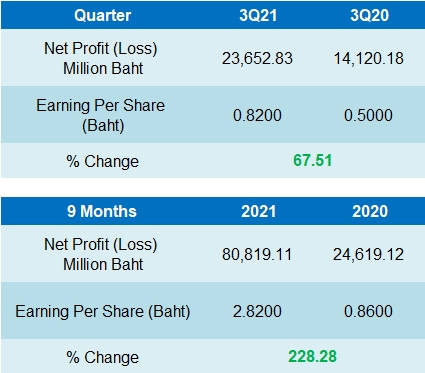 In the third quarter of 2021 (3Q21), PTT and its subsidiaries reported EBITDA increased by Baht 43,057 million or 63.8% from the third quarter of 2020 (3Q20) of Baht 67,465 million. This was mainly from Petrochemical and Refining businesses that the Petrochemical business’s performance increased from the higher of overall petrochemical product spreads both of Olefins and Aromatics as well as the increased sales volume offset with the decline in the Refining business’s performance due to lower sales volume and increased hedging loss in this quarter.

In addition, PTT stated that the company currently has long term LNG contracts with Qatargas, Shell, BP, and Petronas at 5.2 MTA and has a capability to procure LNG in order to fulfill the country’s demand growth in the future.