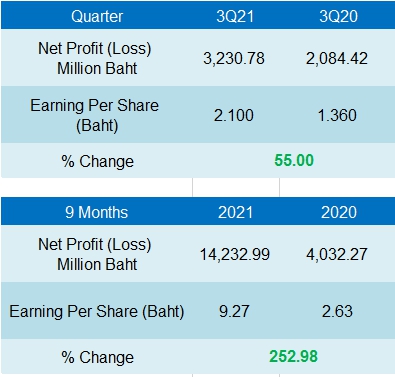 STA stated that revenue from NR business, which accounted for 62.0% of total revenue, was 17,665.6 million baht, growing 110.3% YoY on the back of higher ASP and sales volume as well as increased market share. Revenue from NR products also increased 5.3% QoQ as its ASP was higher than NR prices on the global markets. Because of timely delivery and credibility, the company was the first choice among both domestic and overseas customers and the sales volume in 3Q21 was 311,308 tons.

Meanwhile, revenue from gloves business accounted for 37.9% of total revenue and totaled 10,801.3 baht, growing 33.6% YoY on the back of the ASP that increased 34.1% YoY. However, the revenue decreased 16.8% QoQ because of the lower ASP QoQ. Sales volume improved to 7,051 million pieces as production fully resumed at Surat Thani and Trang plants following a temporary suspension because of COVID infections in 2Q21. As a result, gross profit margin for gloves was 53.2%, which still ranked among the highest in the industry.