MCOT Public Company Limited (MCOT) has announced its 3Q21 consolidated financial statement through the Stock Exchange of Thailand as follows; 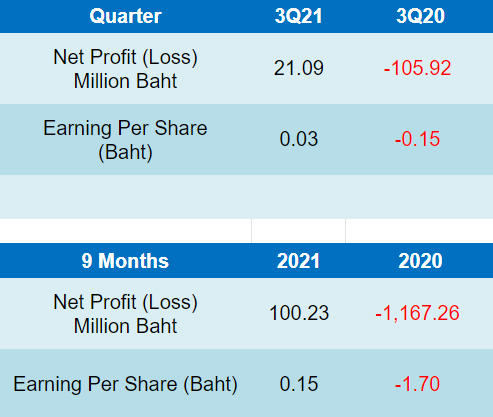 MCOT’s operating results in 3Q21 showed profitability that continued from the previous quarter. Profits in 3Q21 and the first nine months were 21 million baht and 100 million baht, which increased 120% and 109%, compared to the same period of 2020 respectively. Such   profitability was due to increased revenue and continued cost management, bringing a significant cost reduction in 2021.

The total revenue was 392 million baht, a 1% increase, compared to the previous quarter, but dropped 2%, compared to the same period of last year, mainly due to increased revenue from all business including TV, broadcast network operations, digital and new business.

TV revenue increased 5% due to increase in advertising revenue in Nine Entertain programs and special projects with public sectors as well as time-rental partnership.

Broadcast network operations’ (BNO) revenue dropped 10%, compared to the same period last year. The drop was partly due to the fact that services provided for a distance learning channel during the outbreak situation of COVID-19 for a 6-month period ended in May 2020.

In 3Q21, radio business was affected by the outbreak situation of COVID-19, which prohibited MCOT’s radio stations from arranging marketing activities, therefore, affected customers’ consideration in spending PR budget. Central radio was largely affected rather than regional radio. The major source of MCOT’s radio revenue was from the central network, which accounted for 72% of total revenue. The highest revenue-generating station was F.M. 95 MHz., followed by F.M. 100.5 MHz. and F.M. 96.5 MHz.

Revenue from digital and new business increased 53% due to an increase in revenue from  social platforms (YouTube  and Facebook) and revenue sharing from selling products through Shop Mania program, whose business model had been modified in 2020. Shop Mania was re-launched in March 2021.