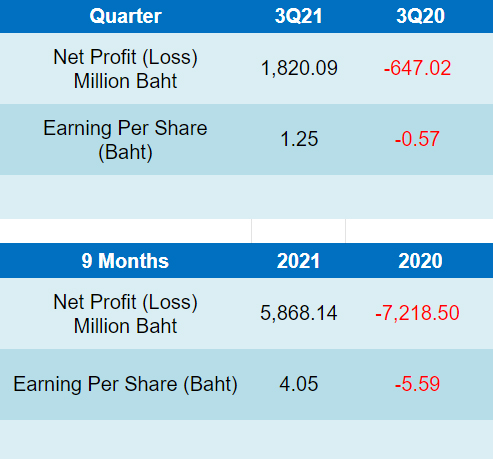 As for performance in 3Q21, BCP realized net profit attributable to the company at THB 1,820 million or earning per share of THB 1.25, compared to a net loss of THB 647 million in the same period last year, mainly due to the following reasons:

1) This quarter, the company changed the record of OKEA performance from share of profit (loss) to consolidated financial statement method.

2) Revenue from sales and rendering services was THB 47,649 million, an increase of 9% QoQ, OKEA’s contribution to revenue increase was 99%. Excluding OKEA revenue, the company group’s revenue this quarter is similar to last quarter. Revenue from petroleum related business of the company increased, from the company’s total sales volume of productsincreased 5% QoQ,mainly from sale of jet fuel and export of diesel and fuel oil. In addition, average selling price per unit increased 3% QoQ,due to the increase in crude oil price in line with economic recovery and growth in oil demand from the progression of global vaccine rollout. While BCPT’s revenue declined mostly due to the decrease in oil trading with outside entities.

3) Other income was recorded at THB 777 million, an increase of 487% QoQ and 543% YoY, mainly from construction delay claims which were received from contractors.

5) Gain from fair value adjustment of investment was recorded at THB 575 million, mainly from recognized profit from changing investment status in the UBE from investment in associate to other investment as a result of UBE’s initial public offering (IPO).