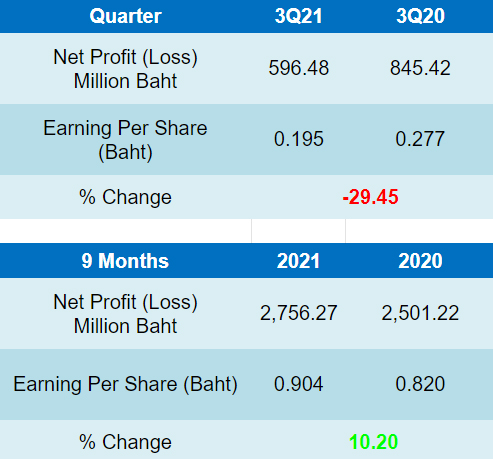 BPP reported net profit for 3Q21 at THB 597 million, decreased by THB 248 million or 29% compared to 3Q20. This was mainly due to a decrease in profit sharing from BLCP power plant from recognition of deferred tax expense and unrealized loss on FX translation. Furthermore, there was a decrease in profit sharing from SLG power plant that has already started commercial operation with effect from higher coal cost. There was also a decrease in China CHPs performance from plant optimization amid the impact from the higher domestic coal cost.

Sales reported at THB 1,048 million, increased by THB 76 million or 8% compared to 3Q20. The main increase was from higher steam sales and others from CHP plants in China, also from a depreciation of THB currency against RMB currency.

Profit sharing from joint ventures and an associate decreased by THB 177million compared to 3Q20.