Super Energy Corporation Public Company Limited (SUPER) has announced the operating results of the company’s consolidated financial statements for the quarter 3 ending September 30, 2021, through the Stock Exchange of Thailand as follows; 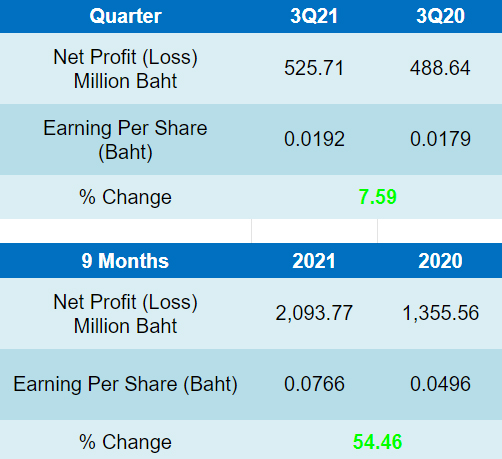 Revenue from solar projects in Thailand amounted to 1,030.4 million baht, a decrease of 81.9 million baht or 7.36% from the same period of the previous year, mainly due to the  decrease in light intensity in Q3/2021. The most affected projects were those located in the lower central region, which has been affected by the heavy rainfall in 2021 and the shutdown in some projects with equipment damage caused by lightning events resulting in damaged solar panels. In addition, the impact of the implementation of TAS15: Revenue from Customer Contracts, as a result, the company had to recognize revenue in Q3/2021, a decrease of 24.1 million baht, which the reduction in revenue recognition will be adjusted for in Q4/2201.

Revenue from solar projects in Vietnam amounted to 747.6 million baht, an increase of 455.8 million baht or 156.3% from the same period of the previous year, mainly due to the company recognized revenue from the sale of the full amount of electricity of the new project 3 projects with a total capacity of 550 megawatts that were COD in the last week of 2020.

Revenue from the waste thermal power plant amounted to 167.5 million baht, an increase of 1.9 million baht or 1.1%, which slightly increased. Compared to the previous quarter, there was a decrease of 24.5 million baht due to the 9.0 megawatts of the community-waste thermal power plant project of Super Earth Energy 6 Company Limited (SEE6), the system has been shut down system for a month due to the production equipment was damaged on August 26, 2021.