Banpu Public Company Limited (BANPU) has announced its 3Q21 consolidated financial statement through the Stock Exchange of Thailand as follows; 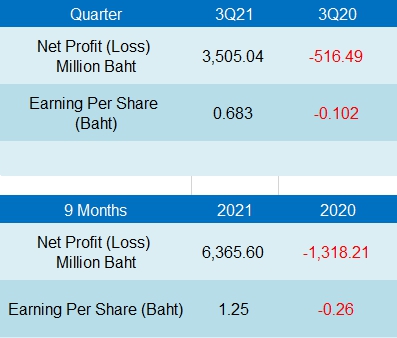 BANPU reported a net profit of $106 million in 3Q21, improved from a net loss of $16 million in 3Q20 the 3 core businesses continue delivering strong cash flow and mainly due to an increase in coal and natural gas price that support overall group performance, also the recognition of gain on foreign exchange rate from a depreciation of THB currency against USD currency.

Sales reported at $1,161 million (equivalent to THB 38,234 million), increased by $691 million compared to 3Q20. An increase of sales $466 million derived from coal businesses, $ 220 million from natural gas business, while a decrease in sales from power and steam business and others totals $5 million.

Sales from the natural gas business in 3Q21 reported at $231 million, increased by $220 million compared to 3Q20. This was mainly from sales recognition from Barnett shale that group acquired this asset since 4Q20.

Sales from power, steam, and others from 3 CHP plants in China of $32 million, decreased by $0.80 million compared to 3Q20, was mainly from decreasing sales volume of electricity and steam.

Profit sharing from joint ventures and associates reported at $64 million, increased by $32 million or 100% compared to 3Q20. The main recognition was from profit sharing of Hongsa power plant and PhuFai mining in Laos of $22 million, increased by $2 million from 3Q20. This was mainly from gain on foreign exchange rate translation of $4 million, whereas a decrease in operating performance of $2 million as unit 1 and 3 underwent yearly plant maintenance.