SISB Public Company Limited (SISB) has announced its 3Q21 consolidated financial statement through the Stock Exchange of Thailand as follows; 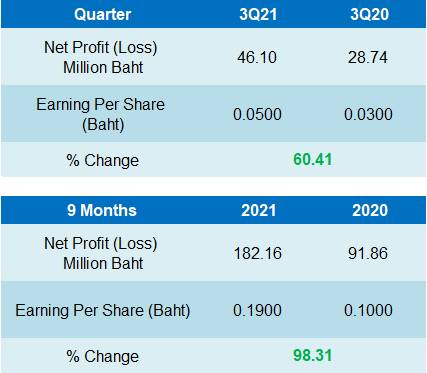 In the third quarter of 2021, SISB recorded a total revenue of 257 million baht, decreased slightly by 3% when compared to the same period of last year. The decrease was due to lower application and enrolment fee incomes and education equipment income.

Additionally, the Bangkok Metropolitan Administration announced to close the construction sites, including the suspension of the construction, and restricting the travelling and transferring of the construction workers from 28 June to 27 July 2021. This resulted in a delay in the campus and education development than what was previously planned.

The new Secondary Building at Singapore International School Thonburi is expected to be fully completed by January 2022.

Meanwhile, the construction of Singapore International School Nonthaburi, which is located in Changwatthana-Ratchaphruk area is divided into two phases, with the first phase comprises Nursery-Kindergarten and Primary levels, and the second phase comprises Secondary levels. The company expected that the first phase would be ready by August 2023, which was delayed from the previously planned by a year, due to COVID-19 situation.