– SET Index closed at 1,649.54 points, increased 4.48 points or 0.27% with a trading value of 94.4 billion baht. The analyst stated that the Thai stock market performed better than expected with a push from ICT sector, but expected the SET Index tomorrow to move narrowly after being unable to hold the 1,650 level in today’s session, giving a support level at 1,640-1,635 points and a resistance level at 1,658 points.

– Japan said it is weighing the decision to release oil reserves, responding to the call from the U.S. to curb rising oil prices. China said last week that it was also going to release its reserves as well.

– Thailand‘s October exports expanded 17.4% while the Ministry of Commerce expected exports to grow 16% this year.

– TRUE and DTAC made an announcement of their Boards of Directors resolution regarding the feasibility of amalgamation between the two businesses. TRUE closed 10.19% higher at ฿4.76/share and DTAC closed 9.09% higher at ฿45.00/share. 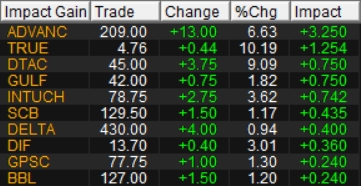