– SET Index closed at 1,644.01 points, increased 5.28 points or 0.32% with a trading value of 86.4 billion baht. The analyst stated that the Thai stock market edged higher, driven by domestic play after the Thai GDP came out better than expected with an estimate of 3.5-4.5% growth next year. Meanwhile, the market is looking forward to the result of the U.S. and China meeting, expecting a positive outcome.

The analyst forecast that the domestic play would continue to support the Thai stock market in tomorrow’s session, giving a support level at 1,635-1,640 points and a resistance level at 1,655-1,660 points.

– The Premier of the U.S. and China in a virtual meeting on Monday reached consensus to ease the relationship between the two countries on mutual cooperation.

– Elon Musk sold another $930 million shares to meet tax obligation, however filings say the sale was pre-planned in September.

– The Extraordinary General Meeting of Shareholders of SCB approved an establishment of SCBx and an interim dividend payment of THB70 billion. From the standpoint of a rebound in 2022 earnings and the latest restructuring plan, the analyst recommends “BUY” for SCB with a target price of 150 baht.

– PTTGC rated number one for three consecutive years in the world in the DJSI Chemicals Sector, as it transitions into net zero organization. 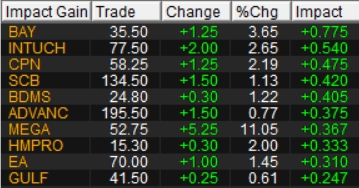